In For a Penny, and For Faeries

The other day I cleaned up my front patio, finally put some flowers in the planters (mostly because I know more hummingbirds will come to the feeder if there are also pretty blooms to lick :), and had the idea to place one of the small pots by the front door, not with flowers in it, but with pennies instead. The inspiration turned out amazingly more appropriate than I imagined, but honestly, I don't know why these things still surprise me. If you believe in magic and go looking for it, you will find it. Duh.

You see, I have this bit of a tree stump to the left of my entrance. It was part of a load of firewood I bought a couple years ago. It started out in a different place on the patio as a decorative thing (I had a turtle sitting on it - fake, of course, because can you imagine trying to teach a turtle to sit and stay? I don't think even Cesar Millan could do that). The wood was further spared its flaming death when I got the idea to use it as an organic door stop; I was tired of playing Beat the Clock with my lock and key while trying to avoid the loud crash of the screen slamming into the wall. (I was winning the game, but the competition was making me tense.)

Half the top of the stump is flat so a small item is easily placed upon it, but the other half is slanted, making it difficult to satisfy my desire for symmetry. Flowers seemed a logical choice as they can hang over the slanted half, but very little light reaches that area and all the flowers I bought were for full sun. I tried several small things from around the house like garden Buddhas and lizard statues, but nothing seemed right. I was trying to think of something colorful to bring light to the area when I caught sight of one of the small, empty red pots. My mind's eye saw pennies in it.

Now don't laugh, but when I placed the penny pot on the stump, there was some remnant of memory running around my neurons that told me leaving shiny pennies by the door (and they do have to be shiny) brings the faeries around, which is associated with good luck. I searched my memory banks for why that was or where I heard that, but there were zero results. I gave up, thinking surely it was Irish folklore and perhaps I was pulling info from my genetic memory. (I am both Irish and Scottish, Land of the Wee Folk.) My logical Left Brain (which dabbles in creative thinking on the rarest of occasions, mostly preferring to leave that to the Right half of the head) barreled in saying no matter; it's got to be good modern feng shui anyhow.

I washed and dried the pot and went after my change jar looking for pennies. Imagine my surprise when I dumped all the change on the bed and out from the bottom spilled two healthy handfuls of brand new copper. I'd forgotten that the last time I rolled change, I'd kept all the shiniest pennies. I believe it's always good luck to leave some change in the jar so you continue attracting more, and just as bright, shiny things are more attractive to me, it stands to reason they would attract more energy from the Universe. True to the thought, lots of silver coins had piled on top of my saved pennies, obscuring them until the opportune moment. Luck? I think not. Quantum planning perhaps.

In feng shui, red is used to stir up movement or excited activity (which is why it's hard to sleep in a bedroom decorated in red). Wood indicates growth and creativity. Metal brings power and success in finance (especially if you're using money, duh). Therefore - regardless of the Fae - putting shiny copper money in a red pot, sitting on a big piece of wood by the entry of your home has to be a pretty powerful cocktail to increase money flow, don't you think? I didn't actually know that though until five minutes ago when I looked all that up while writing this. So, like... wow!

(By the way... apparently it's working. I've had two more people book dog sitting time all the way out in Sept/Oct, my new freelance client just gave me more work, and I was contacted by Pearson asking if I had time to do some work for them! Woohoo!)

But then... THEN... being who I am, I still had to know why I thought a Penny Pot would attract faeries. I mean, there was no evolution to this idea, it just sort of showed up in my brain. Some googling turned up that Jonathan Wright in Ann Arbor, MI actually builds tiny fairy doors for the wee folk! How cool is that?! (Don't think I won't be getting one of THOSE like yesterday!) I found another page HERE about the doors... seeing that people do leave pennies as offerings just supports my theory that this has some sort of folklore background to it. Why not dimes, which are smaller and worth more? What is it about copper pennies? Why have so many people just decided that's the thing faeries like?

Oddly, I can't find a darn bit of mythology on this in Google. This brings to mind a sign I snapped a pic of just a few days ago: 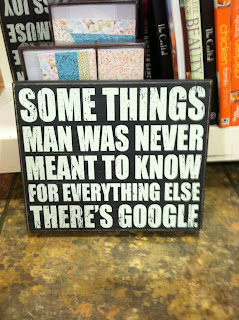 I will update this if I find the answer. Once again it's 3:07am, and words are robbing me of sleep.

As for the "I knew it!!!" at the beginning, I've kind of written myself out and around that... oops. Originally I said that because of finding the thing about leaving pennies at the fairy doors, but the more I delved into that, the more I realized it still didn't answer my "what IS the folklore of this pennies by the door?" question. So I guess I still have research to do.

One more thing before closing though: one of the reasons I haven't posted for so long—again (Gods!)—is because a few weeks ago I received a real live, honest-to-goodness bound and printed, dead trees and ink paperback novel written by my friend Jenn Flynn-Shon. It's titled Ripple The Twine, which always makes me think of magic (I mean c'mon, doesn't it sound like some sort of magical phrase?), but actually it's about a goal-driven chick who likes hockey and has put her relationship status on hold for far too long when she meets a hot Irish guy (hey, wait a minute, weren't we just talking about the Irish?) and shenanigans ensue. It's Jenn's first publishing endeavor and the day I got it I sat down and started writing a blog about the experience of receiving a copy of a REAL book that your friend wrote as a professional author, and how that affected me and my aspirations for a writing career. I was determined I would not make another blog post until I posted about her book. However, between reading her novel, taking on a new freelance client, and Life In General, I have not made the time to put the finishing touches on that post. Therefore, consider this pre-cursor a lame attempt to placate my guilty conscience for completing this entry before the one about her book, but truly, you should go check it out RIGHT HERE and buy a copy! I am so proud that she is truly a published author, and she's out there marketing it all by herself. Yay for the Internet and the opportunity it's created to self-publish! I'm so happy for her. More on that coming soon! 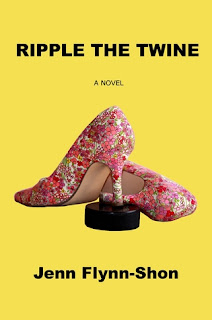 Posted by draagonfly at 3:25 AM

Oh my goodness my friend thank you so much for the shout on Ripple the Twine!! You rule :-) I hope you're enjoying it but at the same time...HUGE kudos for taking on a new freelance client, that's major & money in the bank as well as by the front door. I may just have to try that penny trick. It sounds like its working for you!

As a fellow Irish lass I can't say that I recall having heard the faeries & pennies folklore but my older generations weren't as into the magical side of our culture. I'll poke through a few books I have & see if I can come up with anything and report back if I do!

Thanks again for being awesome ♥

I am enjoying RTT quite a bit! I know if I write much here I'll end up writing out the post I've already started, so I'll just say I think you're awesome again, and I swear that post is coming soon. Everything happens just when it's supposed to, so I guess maybe I've been delayed to keep the energy going? Who knows what the Universe is thinking. :)

If you find anything about the pennies and fae, I'd definitely be interested to hear about it. I just find it hard to believe I came up with that idea all on my own.

Hiya Wolf! Always happy to stir up the chakras. It's good for you. :D

What an awesome post; I wonder why I've never read your blog before, being that I'm Jenn's mom and all. She is right - you are awesome! ♥

I love the idea of attracting faeries to the garden with pennies by the door, and more abundance as well.

Very enjoyable read! Thank you for this little escape.

Welcome Judi! Thanks for checking out my blog, and thank you for the compliment! <3 I know you must be awesome too since you've raised such an amazing daughter (and I hear there's another one in Tucson!).

interesting blog. It would be great if you can provide more details about it. Thanks you

Thanks for commenting poona. Glad you enjoyed the post.