I've had days when I felt like this, but I gotta say, none of them have been since I moved to San Diego! :D

This just cracked me up so bad. Poor kitty!

Email ThisBlogThis!Share to TwitterShare to FacebookShare to Pinterest
Labels: pieces 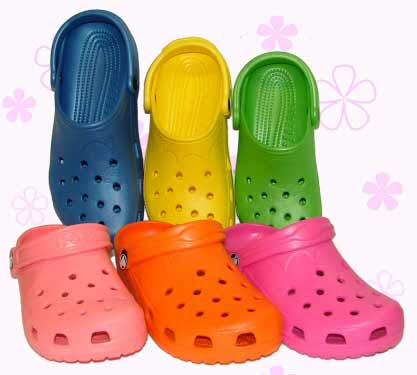 When people started wearing Crocs - the latest couture horror - out in public I thought it was a joke. Or perhaps they didn't have time to change before leaving the garden on an urgent mission to Target to procure more unconscious synthetic crap cranked out with slave labor from the parts of China not covered by carefully-monitored and censored Olympics cameras. One can excuse a social misstep now and again, and certainly I am no slave to the fashion trade.
When I realized that it was actually a growing fad, I vowed never to allow such repulsive things that will surely become a pop culture faux paux the likes of neon spandex or Jellies (::shudder::) within 100 yards (that's .09 kilometers for my Metric friends) of my closet. And although the manufacturer claims they are NOT plastic, I contend that because the company is loathe to reveal their process by which the "proprietary" closed cell resin (PCCR) is formed, that's as good as plastic to me. Either way, it's some chemicalized unnatural mutant bastardization of fossil fuels that will probably end up being a layer all its own in the Great Pacific Garbage Patch. I feel the ocean temp rise a degree and the air become more unbreathable and polar ice caps melt and I'm quite sure at least 10 animal species going extinct every time my eyes are unfortunate enough to meet a pair of these biped disasters.
However... I have said before - recently even - how curiosity will kill Schroedinger's cat. Perhaps I should change my blog's name to "Here Kitty Kitty."
The truth is I tried a pair of these on the other day because they were at TJ Maxx for really cheap and they were the actual Crocs brand (as if that should even matter, but sometimes Ego is my shopping buddy - I can't help it). I had to know WTF everyone is so thrilled about with this hideous footwear that a large display had even invaded my organic supermarket. Organic supermarket - as in humans who shop there are generally the kind that think about ecology and the suffering of Our Tiny Blue Marble and try to do the right things to balance their carbon footprint. These organic, eco-minded mortals are not only wearing, but promoting offensive plastic shoes! How can this be? What kind of evil spell did Crocs cast on the population? Are we Hooked despite the ticking of the ecological time bomb we play on? 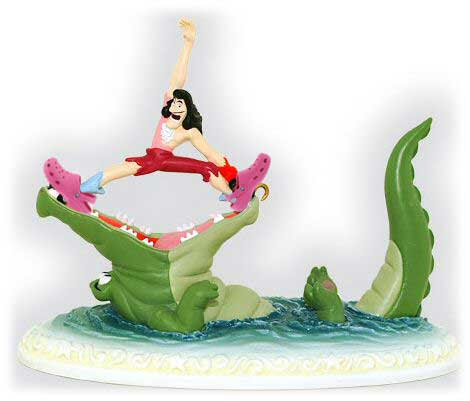 (Yes, I Photoshopped that myself, thank you very much. Socks with Crocs tho? Tsk tsk Captain Hook.)
The Crocs looked at me from the shelf like a street whore smiles at Hugh Grant. (Don't get me wrong, I love Hugh and could listen to that voice all day long. But when IS he doing another movie? Hey Hugh, stop faffing about the UK and get on with it already!) I passed by them three times sneaking glances out of the corner of my eye before I finally confronted myself and admitted I wanted to know what they could do for me. They were an ugly plain white (like someone forgot to drop the color pod in the vat or something), but they were my size. Even before my feet knew the wicked ways of this foamy footwear, I started rationalizing that the original idea of gardening shoes was not a bad one because you can hose them off without ruining them. Maybe plastic is good in moderation? (Like Americans even know the definition of that word. Moderation, silly - not "plastic"!) I mean look at the iPod. That's definitely worth some landfill, right?
There was no one to witness my temporary insanity, so dammit, I slipped my feet into them, just for kicks...
...and like Snow White's stupidity in taking unpackaged, inorganic fruit from strangers, I found they were the most comfortable things I have ever walked on. It was like having a medium-density sponge floor everywhere I went, and I could instantly see why any professional that's on their feet all day (read: nurses in particular) would immediately adopt these as The Most Important Part of Their Wardrobe. I've heard companies claim that wearing their shoes is like walking on a cloud, but this is the only thing I've ever experienced that lived up to that analogy.
My logical self quickly shoved all that aside and reminded me sternly that a pair of these in my house would not only create an eyesore, but crow would be What's for Dinner for a very long time when my friends found out. My brain also assured me that Scientists would probably release some study any day now that reported all sorts of back problems or foot deformities or other maladies attributed to overuse of these unsightly slabs. My resistance was further aided by this particular pair's painfully boring color - no wonder they made it all the way to the discount store. (And even so, my sinful brain wheedles that the particular shade of cauliflower vomit I was perusing resembles a blank canvas begging for Sharpie markers.) I did notice a more acceptable basic brown pair, but only a tiny Asian woman would've fit in them. I'm small, but not Asian.
I escaped my experience without fouling my recyclable canvas shopping bag with their presence, but the memory of walking in them lingers like a permanent virus. I even considered them AGAIN in another store because there was a display with every color known to man (and some certainly not of this Earth - see grotesque pic above), but they were ridiculously expensive and if I wanted to taste that much feathery guilt, I resolved to at least smother it in economics.
So I came home to write this blog entry but my fairness gene kicked in, and I was compelled to look up what my fellow Hippie TreeHuggers (as Rich, my former neighbor in New Jersey called me) are saying about them. Okay, okay, it wasn't really the fairness gene - it was the "how much dirt can I dig up to make the argument of how these things suck" gene. I'm not sure these squeaky sandals stay as clean as I'd like.
Here's what I learned:
So caveat emptor my Planetary Peoples. Memory is still arguing its case before the jury in my head because the damn things really are just THAT comfortable. But I don't think the Logical Left Brain (which controls the eco-side of me, if not the impulse purchases) is buying it. Perhaps there's something injected into that toxic foamy comfortableness that's instantly absorbed into your bloodstream and causes DNA mutation and separation anxiety so you can't stop thinking about them. I'll keep you posted.

~*~
If plastic shoes are not enough to scare the eco-lovin' shit out of you, read these unrelated links I came across in researching what Crocs are made of:
Post: In Answer To Dr. Hood- Fat & Chemical Storage- Doug Haney
http://toxlaw.com/chatboards/toxboard/topic4752/1.27.04.23.42.50.html
US Patent 6835390 - Method for producing tissue engineered meat for consumption
http://www.patentstorm.us/patents/6835390/fulltext.html
I think I just became an overnight vegetarian.
Posted by draagonfly at 12:52 AM 3 comments: