I Could Totally Host An HGTV Show

I know I've been out of commission for almost a month, but deal with it. It's not that I haven't had any blog-worthy thoughts or stories, in fact, there have been tons; I just haven't made the time to write them down (shame, that). I am blessed with a full life.

Earlier this weekend my friend John and I found ourselves in Ikea looking for a ceiling fan for his living room. We recently refurnished the entire downstairs of his house using craigslist.com, moving his style forward from Early Fuck into something that will buy him some time to slap a ring on a woman's finger before she runs screaming to Pottery Barn. Although I'm good at putting together modern pieces from discount places, there are usually a couple things you just have to spring for to get the right effect in the time frame you want. Even so, "springing" doesn't mean you should ever pay suggested retail. (Please!) It may, however, require lowering yourself to shop in places that increase your karmic debt.

Trust me, Ikea hurts my soul almost as much as Walmart, but occasionally entering the labyrinth is a pain worthy of bearing in the interest of A Good Deal. Don't get me wrong; the original intent of the Swedish company is great: making the most out of limited resources/space/child labor in China. It's our overblown waddling American lifestyle that sodomized the Ikea concept until their giant blue box stores became the monolithic icon of rampant consumerism. But I digress.

Since wandering around with open, outstretched hands waiting for the fans to fall into them didn't work (much like my writing career), we asked a yellow-n-blue-clad stoner Totally Chill Shopping Assistant where their most stylish whirly-gigs might be. He tells us Ikea does not carry ceiling fans. Fan-tastic.

We turn to beat a hasty retreat, but like tourists navigating Manhattan, we realize we have no idea where we are, much less which direction the exit is. And the screeching children running amuck have long since eaten our trail of breadcrumbs.

Have you ever tried to escape Ikea? I think even the Marines would have a hard time finding their way out.

Both of us being humans of above-average intelligence (which ain't sayin' much these days), we follow the signs that say "exit" until we realize there are at least 100 of them and they are all pointing at each other. So much for logical deduction. Instead we make like cattle and follow the herd for about five miles until I'm distracted by kitchen accessories. This is Ikea's evil business plan. They force you (read: women) to walk past every single item they sell, hoping something will trigger the Impulse Buy Button in your head (generally, the male chromosomes lack this mechanism). If it's not bedding or furniture or artwork/plants/useless shelf items that strike your fancy, they'll throw some kitchen stuff in your face as a last resort. No one gets out without paying a toll. Hmm. Maybe Ikea originated in New Jersey, not Sweden.

Amidst the culinary paraphernalia, my eyes zero in on a 1/2 mile wide display of small bowls (probably rice bowls) that are the perfect size for John's nightly dose of ice cream. Did I mention John will keel over and die without this evening ritual? In fact, one night I threw out the melted, watery remains of a sundae because I assumed he was done, and he had such a reaction I thought one of us might end up in the ER. GAH. Did I also mention that my house has no appropriate sized bowls for this sacrament to the frozen snack Gods? (There is no such problem at his house of course. That would be like the Vatican running short on common sense... I mean alter boys... I mean wine glasses.) My cereal bowls are too big and my Pyrex petri dishes are too small. We can't have that. Ikea has won. They flipped my switch. (No, I have never been officially diagnosed with OCD.)

I trip and fall right into the brand marketing assuming the bowls are cheap, so yes, thank you, I'll take four. I justify my potential purchase by pointing out it's possible picking them up with intent to buy will open a space portal directly to the cash registers, shortly followed by the exit. Unfortunately that turns out not to be true. After several moments of debate during which the bland oatmeal color (like the white ones at his house are more interesting?) and lack of identifiable pricing is discussed, we put them back since there was no escape hatch offered with the purchase, and he is immune to The Ikea Brainwashing Technique.

Being the more daring of the duo, he takes a sharp left and whips us through one of the ominous grey doors that surely will set off fire alarms and sprinklers if opened, alerting police and causing mass panic in which we will be trampled by millions of zombie shoppers in their craze to get away from they-don't-know-what-but-it-must-be-bad-if-the-alarm- is-going-off... but hey! Whaddya know? It's a free pass to the exit! Do not pass go, do not spend $200! Go John! I knew I kept him around for a reason.

So we're out and on our merry way, but the seed of having those bowls has already been planted. (Wait, didn't we go in there for something else?) They are cute and convenient and The Brain has already rationalized their existence in my life. This usually means they will end up in my cabinet one way or another.

Today I was at the dollar store checking to see if anything on my grocery list was available there. Dollar stores are widespread here in SoCal and thank God for that. The Universe loves balance so perhaps this is Its way of trying to offset the ridiculous cost of living in Paradise. Of course, this benefit is only available to those who can transcend the belief that Whole Foods is the only grocery store worthy of your presence (it took HOURS of meditation I tell you), and that fluency in Spanish is not really required to shop there (they employ one stoner Totally Chill Manager in each store for translation purposes if you really need him).

Anyway, as I was picking up some pasta and Toasted wheat crackers (ok fine, and a can of the cappuccino flavored cream wafers that look like straws, which I feel sick from because it's so hard to stop eating them), it occurred to me that they may have something similar enough to the Ikea bowls to appease my need to have a perfectly sized dish for every occasion. A quick scan of the assorted "china" (I use that term loosely) revealed some very similar bowls indeed. Same bland oatmeal color, and wow - they're about the same size and shape. I grab four ($4! Beat that Ikea!) and head home.

I sink my new bowls into soapy water to loosen the stickers. As I peel back the first one from the bottom of the vessel, I see a familiar name stamped above all the fine print. 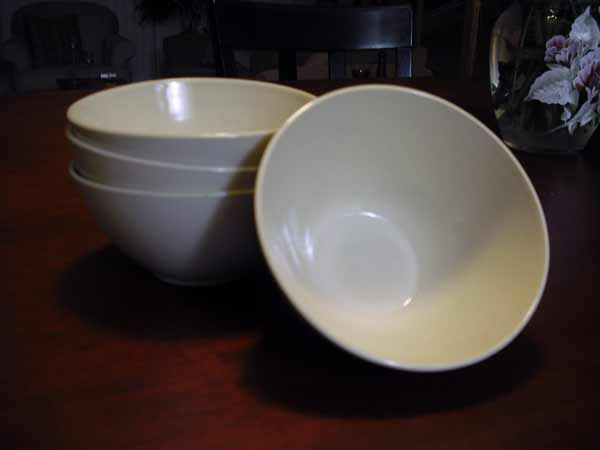