I Am Grateful For Imagination

My habit of thought over the past couple decades has been that we have our salary rates all wrong in this society. We pay those in Hollywood or sports millions of dollars to create a couple hours of entertainment for us while our teachers and firemen and emergency response teams are doing their work mostly on good morals and shoestring budgets. It didn't seem fair.

However, today, I received a different perspective out of the blue. I was watching a YouTube video of a conversation between Richard Dawkins and Neil deGrasse Tyson, and although I've realized this before, it was not quite in this way: science has created things that used to only be science fiction from Hollywood. Would they have created these technologies WITHOUT Hollywood first dreaming them up?

Einstein of course has the famous quote, "Imagination is more important than knowledge." I've always believed that to be true in my head, and now I realize perhaps it has moved down to my heart.

Is the economic pay scale of the USA not a perfect example of that quote? Who do we pay the most? The ones with imagination (Hollywood at least), or the ones with knowledge (educators and heroes)?

Scientists' minds generally lean toward logic and fact finding - they want to prove things work or exist or figure out why something is true. We consider them "at the forefront of technology" but are they really? Maybe scientists are actually the ones at the end of the line. What if the creative geniuses in Hollywood are the ones blazing the trail of evolution and we don't even realize it?

A logical mind that seeks facts is not normally the same type of mind that envisions things so far out that the majority of people on the planet hadn't even dreamed of it. (There are always exceptions of course - Tyson being one of them I think - and those are truly remarkable people with minds that are balanced in both creativity and logic.)

A specific example is another YouTube video I saw about a guy that created a machine to turn plastic back into petroleum. Most people in first world countries now have also heard of biofuel - breaking down what we consider garbage into usable fuel. Where do these ideas come from (at least some of them)? Most people from the 80s will remember the movie Back to the Future. Christopher Lloyd's crazy scientist character uses garbage to fuel the DeLorean time machine at one point. (I'm sure there are earlier examples, but that's the first one that came to mind.) That is now POSSIBLE in our real world (and actually has been for some time). It's not affordable for most, or prevalent in our society yet, but neither was TV when it was first invented. Or cell phones. Or cars. Or dozens of other technologies that have become commonplace perhaps because a scientist saw a cool, convenient gadget in a movie or a tv show (or in the case of 19th century inventors, perhaps heard an idea from a storyteller of some sort) and said, "I can figure out how to make that real!" And let's not forget the creative minds in companies like Apple who can come up with a product out of seemingly nowhere (iPods!) that we never knew we couldn't live without.

So perhaps our Hollywood staff is not as overpaid as I thought. I mean what value would you put on evolution? On advancing our thoughts and ideas? On education? Does it even really matter if we advance and get smarter and make new things? IS it even "getting smarter" or just becoming different? I guess it depends on the roads we choose, which is based on creativity, not always logic.

And in the opposite vein - what of our "heroes?" The firemen and policemen and EMTs that save lives (some would add soldiers to that, but war is a whole other subject I'm not getting into here). I'm always the first to admire and thank emergency response people for their "underpaid service," but is our ability to prolong our lives actually what's mucking up the planet? Should we be thanking the ones that save us? From this new perspective, I'm not sure.

Certainly I was grateful to everyone involved is saving my grandparents' lives when they had a car accident about a year ago, but then again maybe it's a selfish thing for me to want my grandparents to live forever. I don't think even *I* want to live in this particular body forever! How boring would that be? About as boring as only getting to read one book, or only watching one movie... forever. Why would I wish that on them? Forever is a VERY long time. (And if you get into the philosophical question of "why are we here" I can imagine only being able to "live" one story forever might have been the impetus for multiple lives... but that's a whole other blog!)

Perhaps we are playing God or not facing our fears by keeping people alive for so long, and the consequences are the typical collection of physical inconveniences that we now label "old age." Are years of incontinence and dementia something to celebrate? :\ Perhaps we have advanced in our physical technologies, and we pat ourselves on the back for our so-called advances in social sciences, but are we actually still in the dark ages about death and other lifetimes?

Who would we be if we did not fear death?

Perhaps my grandfather could've avoided all the indignities and challenges of emphysema and Alzheimers if he had not been wearing a seatbelt and was therefore removed from the trouble of dealing with all that for another several years. My grandmother was NOT wearing a seatbelt and would have died without the help of the Intensive Care Unit. It's really a miracle she survived. I am extremely grateful to spend a few more years pestering her over the phone (we live on opposite coasts), but was it fair to keep her here only to be trapped in the house with my grandfather who needs someone to babysit him like a child at all times due to the medical problems he has now? What kind of existence is that (especially for a woman that is still very mobile herself)? Obviously a car crash full of anxiety and fear as you transition into another state of being is not an ideal way to go (I am not saying I wish that upon anyone, especially not my grandparents!), but perhaps we've created the ways in which we most commonly leave this existence through our misunderstanding of death and consequential fear of it.

If you knew in your heart all deaths have the possibility of being peaceful and happy, would you be more accepting of it and therefore be okay when your loved ones take that journey? Many people pay lip service to the idea, but underneath their concept of death, and what they believe in their heart about it, is still based in fear. I believe it will take a shift in a majority of society's consciousness to change that.

Native American elders (from a century ago, before the casinos) would simply decide when it was their time to leave, and they would go out in the woods or plains or wherever and have a peaceful, purposeful death. Same with Buddhists. We don't have nearly enough movies about that. Instead the film industry makes the most money from perpetuating our imaginings of a violent death, which in my opinion just creates more violent deaths in our world. It's a vicious circle.

By the way, I still think our teachers are WAY WAY underpaid. They give us a basis for learning to survive in this society. The trouble with teachers is that we have a limited idea of who our teachers are. To me, EVERYONE on this planet is a teacher in some way to everyone they come in contact with. Should we all get paid appropriately for what we teach each other? Well actually, I think we do. We have a beautiful Earth as our school, friends and family to love and support us, and most importantly our imaginations which fill in all the space between. To me, those things are the best payment of all.

Well… now my thought associations appear to have come full circle in the edits, so YAY for that!

I still haven't justified sports - perhaps that's truly only entertainment - but now I can allow for the possibility that maybe we're not as screwed up as we think in what we put value on.
Posted by draagonfly at 3:53 PM 2 comments:

I Am Grateful For Sunsets

For every afternoon in summer when I think surely I will die of heatstroke due to my western-facing windows and a condo without central air conditioning, I get the MOST AWESOME SUNSETS EVER in winter, and the ability to keep the drapes open for the entire thing, while the last rays warm my bedroom for the evening ahead. 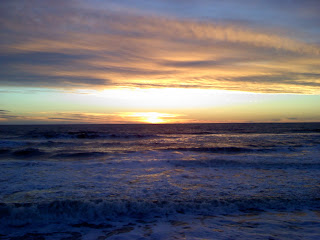 (This pic was actually taken on my birthday, Dec 30, 2010, at Oceanside beach, but you get the idea. I am often too busy watching the sunset to take pics of each one!)
Posted by draagonfly at 5:03 PM 2 comments: