I Am Grateful to Live in Abundance

This morning I got up early (no small feat for this night owl!) and headed to Escondido with the bf to pick oranges with San Diego Food Not Lawns. I want to give a big Gratitude Shout Out to Esta Browning, an awesome friend I met through my volunteer work with Help the Homeless, who posted the picking event on her Facebook, which is why I got to be involved today.

SD Food Not Lawns is an organization started about a year ago which tries to match up otherwise-unharvested fruit from the thousands of trees on private property in Southern California with food banks, soup kitchens, homeless shelters, or any other worthy cause that can use them. Many properties down here have more trees than the owners can possibly eat the fruit from. Almost everyone knows *someone* that shares fruit from their fruit trees. Not letting the rest of it go to waste is a truly noble cause. I've often said myself that if we can FedEx a package anywhere overnight, why can't we send food that normally goes to waste here in the US to the countries with starving populations?

Mother Earth provides us with everything we need. And because we have evolved to such a point (much to the detriment of our planet to boot!) that we can move products around the globe in 24 hours, we are now responsible (and have NO excuse) not to be able to spread the abundance from one area to another.

With that thought in mind, it's TOTALLY cool how every time I put something out there to the Universe, it answers me almost immediately. My friend S, whom I dog sit for every now and again, has about 100 grapefruit and orange trees on her property. They only have them because they came with the house. As far as I know, they don't do anything to support the trees other than give them water so they don't die. They pick the fruit for as many friends and family and neighbors as they can, but a TON of it goes to waste. 100 trees produce A LOT of fruit!

The last time I was up there letting the dogs out, I was discussing with a different friend what a waste it is for all that fruit to just drop and rot. We brought a bunch home as I know we're allowed to, but we can't possibly eat our way through the orchard. Having just been on my weekend trip downtown for Help the Homeless, it occurred to me that taking a bunch of that fruit with me next time might be awesome. That thought naturally led to thinking about how appreciated that fruit might be at soup kitchens and shelters across the county.

Lo and behold, Esta posted the link mentioned above like a day or two later! They match up otherwise-unharvested trees with those that can benefit from the food. How COOL is that?!! Gotta love synchronicity.

Note: I probably intended to write something more for this post, but never finished it. It was in draft format when I found it but since it sort of appears to be a complete thought anyway, I'm just posting it so it stops telling me I have all these drafts! Can't have a drafty blog!

Posted by draagonfly at 4:02 PM No comments:

I Am Grateful for Intelligence

The Best.Jeep.Ever. has needed some TLC lately. It was time for an oil change, a couple lightbulbs needed replacing, new tires, a nice bath… I'm never upset about spending money on the Godly Automotive Wonder that takes me everywhere I want to go exploring. I love my Jeep even with its big 'ole feet. You know what they say about a large carbon footprint... oh wait...

I admit I've never changed my own oil or a flat tire though. Some things are better left to the boys to get dirty with, or the experts that have all the right tools to keep an easy 10-minute job from being a 5-hour headache. However, I'm not one of those girls that's completely helpless in the garage either. I own REAL tools. They are not pink or sparkly - they are SnapOn silver, Dewalt yellow, Home Depot orange, Makita blue, or Ryobi green with black dirt accents. (And none of them are diminutive! ;) I've replaced my own headlights, battery, wipers, and tail lights in the past. I've installed iPod adapters (which required taking apart the dash to get to the back of the stereo head unit) in both the Camaro and the Jeep all by myself. Once I even changed my own idle air control (IAC) valve after a brilliant mechanic broke it (and zip-tied it as a fix! WTF?!), then wanted to charge me $183 for a replacement! I did it myself for less than $70. Go me!

Obviously, I am not afraid or ignorant of my vehicles.

So I found myself at the local auto parts store the other day. It happened to be a day when I chose to wear nicer clothes because the boyfriend was with me and I like to look my best when we present ourselves together in public. We are each other's arm candy. :) My outfit that day included a beautiful cotton sweater, designer jeans, high heeled boots, appropriate jewelry, and my expensive (not!) sunglasses (THOSE have sparkles on the sides!) pushed to the top of my head. My flashiest name-brand purse (under $100 people, so hush up) hung from my shoulder. To be fair, I suppose this look does give off a certain impression, especially to men found under a car more often than in it.

Looks can be so deceiving tho, can't they? This is why I don't judge books by their cover (except for the new teen novel Tiger's Curse by Colleen Houck - I totally bought that solely because the cover was cool and it turned out to be an awesome story! SCORE! Her next book, Tiger's Quest, is coming out in June. Preorder now!).

I was looking for the lightbulb that goes over the license plate, assumably so my next victim of Texting While Driving can see who ran them over in the dark and report me to the police.

Having never replaced this particular bulb before, and knowing there are usually several to choose from, I walked up to the register to ask the I-Just-Graduated-College-And-This-Is-My-Chosen-Career clerk to retrieve the correct part number.

"Hello, I need the lightbulb that goes over the license plate of my 2005 Jeep Liberty."

"Lightbulbs are in Aisle 5."

"Thank you, but do you mind looking up the number for me? It's much faster than going through the book." (You'd think the fact that I KNOW there is a number - or a book over there to look in for that matter - would be his first clue, but it went right over his head.)

"Oh sure… you said it's an Oh Five Jeep Liberty?"

Not that he looked up to confirm.

"Thank you." I turned to walk away.

A dirty, plump finger shoots out rather close to my ear. "It's down Aisle 5 there… on the right… here, I'll just get it for you."

I'm sorry, did the back of my head look confused? Even tho I'm already walking in the proper direction, Mr. Helpful whips past me like Dale Earnhardt Junior at Talladega.

"Thanks but really, I can find… umm, ok," I say pointlessly into the backdraft. Thanks for providing great customer service?

The clerk was already scanning the rows so I had no choice but to shut up and follow him. I'm sure he's looked at these things many times more than I, so a nanosecond after I arrive he dives for the correct item and starts heading back to the register. Again, I follow. About halfway there he turns around, shakes the package in my direction, and says as if speaking to a child:

Wait... what? Whoever is installing this? What am I? Chopped liver? Why would the person installing it not be me, the same one asking for the part?

The boyfriend comes up behind me just then, at which point I apparently disappear in a chauvinistic puff of smoke. Relieved there is a penis in the vicinity, Mr. Helpful redirects his comment to my appropriately-gendered partner: "Hey, make sure you use a rag to hold the bulb when you put this in…"

Make sure you use a rag to hold what's left of your ego, pal, cuz mine is rearing up to its entire righteous five-foot-three height.

"I will be the one installing this, thank you," I say as I take the package from his outstretched hand. "And I know not to touch the bulbs because they are halogen and the oils on your fingers will ruin them," I add as I stalk to the register with an unladylike semi-snort of laughter while the two men stand there looking at each other, one with embarrassment and the other with a smirk.

Hello Auto Zone? The 50s called… they'd like their counter boy back.

"Ummm…" Mr. Helpful says, gesturing toward Automotive Genius No. 2, "… he'll ring you up." He wouldn't even look at me as he slunk behind the checkout and disappeared between the stacks of thingamabobs* and whoseywhatsits. I notice the other cashiers trying not to crack up. Whether it's at me or him I have no idea since my nose is so far up in the air at this point, I would drown if it started to rain.


So what have we learned today, kids?

For those of you who are curious, as I was, having never taken the time (until now) to actually find out WHY you shouldn't touch halogen bulbs, The Straight Dope (fighting ignorance since 1973!) has the answer here. If you don't have time to read all the technical explanations offered, the short version is "because it's baaad...m'kay?" Ok, not really. :) It's because your oily fingerprints leave enough residue to impede the infrared component of a halogen's light spectrum from exiting the glass, thereby collecting heat and creating a weak spot, which eventually can cause the glass to explode from stress (much like the heads of chauvinistic males when coming into contact with my ego), shortening the life of the bulb. (In which case I'd say the lifespan of the bulb is the least of your problems.)

Whew... good thing Mr. Helpful mentioned that rag! I thought they were only for dusting!

Ladies (and gentlemen), you now know how to completely disassemble a snarky cashier the next time they condescend to you about halogens. Word. 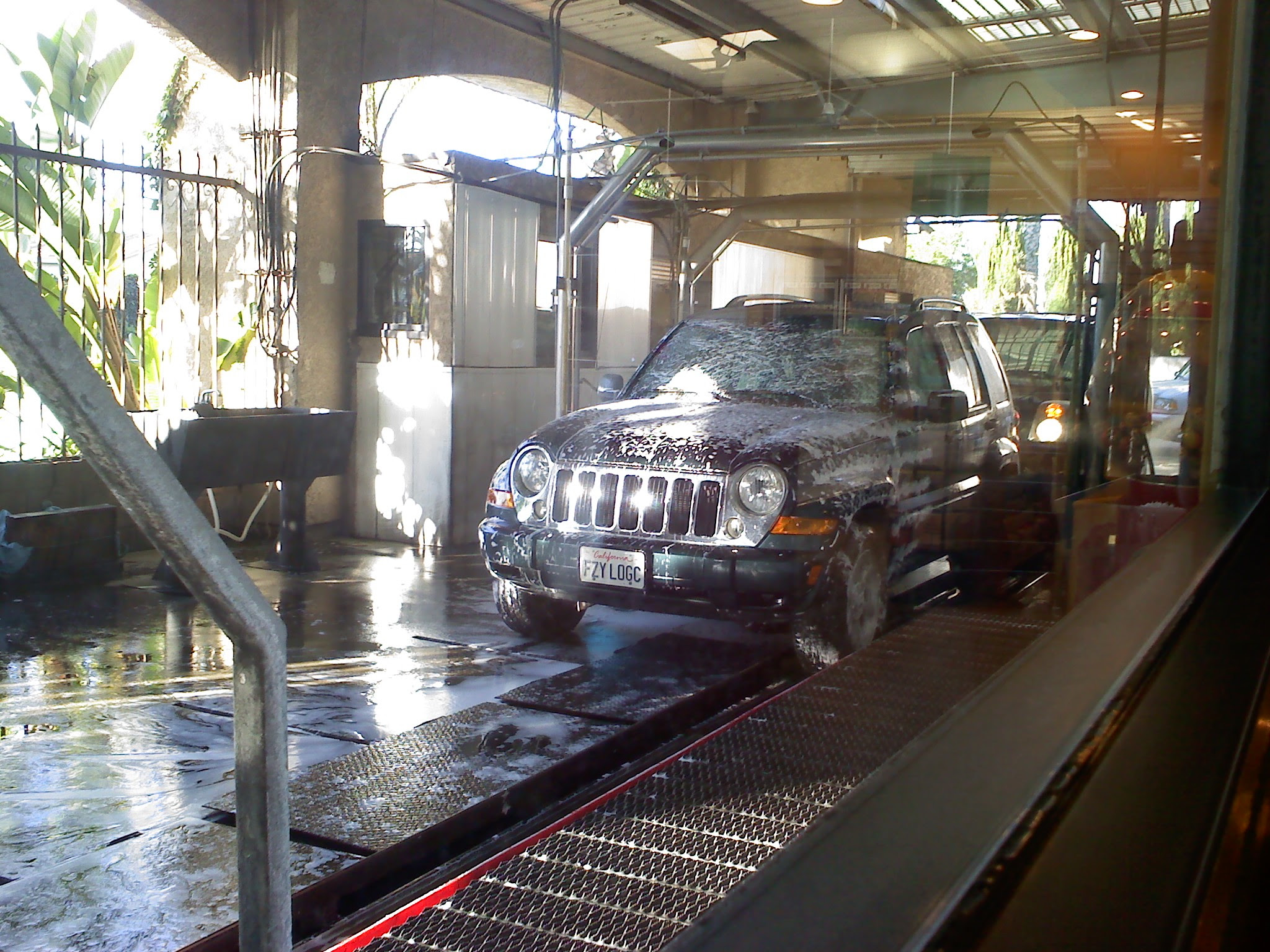 Happy Jeep having a day at the spa. :)


*You know how I know Macs are the smarter machines? Because they know how to spell thingamabobs!
Posted by draagonfly at 4:31 AM 5 comments: