(Sends me this picture from his iPhone): 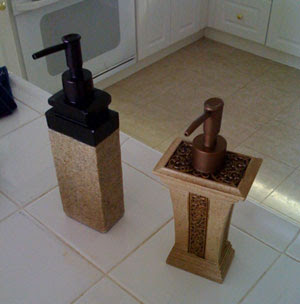 Genius Boyfriend: Old one broke do I use new one on right or replace nozzle on old one?

Me (missing the fact that he said it was broke): Actually I like the original one better (on the left). Cleaner lines. More modern like the rest of downstairs.

Genius Boyfriend: I thought so since mom likes the new. I like the original better too.

Me: The second one isn't bad, but there was nothing wrong with the original. Why not put the second one in her bathroom since she likes it? Perhaps if you decide to re-do that bath you can use the soap thingy as the inspiration for what goes in there next. :)

Genius Boyfriend: I will do that. I tried to switch the broken top, and the second one is a different color.

Me (finally catching a clue): The top is broken? What happened?

Me: Have you tried filling the bottle?

Posted by draagonfly at 1:00 AM

Email ThisBlogThis!Share to TwitterShare to FacebookShare to Pinterest
Labels: jokes, one 4 the book, pieces, relationships

The good news is he now has the inspiration for a bathroom remodel right? Classic.

Oh I can't WAIT to meet him...he will fit in so well with this family!

That is seriously funny. Thanks for sharing it.