Finding the Right Kind of Phrase

I admit I was stalking you, People Who Read Here, on the software that tracks where my blog hits come from. I saw that someone clicked my “physics” link to pull up all the things I’d written on physics. (Thank you, whoever that was. ☺) When I followed suit just cuz I was curious, I was confused to see that I only had three entries under “physics,” and they weren’t even the good ones. I was like WTF? I KNOW I have more than that about physics around here! Where did all my stuff go?

Turns out most of it got filed under “Food 4 Thought.” I guess I didn’t add the physics tag until recently. Silly me. I corrected some of the entries I found and added the proper tagging, so whoever that was please check again and satisfy my Ego. Many thanks.

I believe it was shortly after that when Mark asked me to move out and I began the process of moving to California, and hence, selling tons of my stuff. The moral of this story is:

Be careful what you wish for!

It is also a reminder to myself of how well I manifest things. One awesome new job coming up! Now I just have to define what that is... Oh. Crap.

Here’s another thing I found buried in one of my posts. I don’t even remember thinking it the first time around, but wow. Sometimes I impress myself. (Ego eats that up.) Instead of putting the physics tag on the original post, I’m copying what I said here to separate it out, also because now I have continued thoughts on it.

One more train of thought I must get down on virtual paper, though it will probably only make sense to me. When I was in the shower the other day my thoughts went from the stars in general to the middle star on Orion's belt, to the fact that a friend once told me that star is a gateway to other dimensions; then I thought about imagination, and how our brains could be a conductor between dimensions like copper wire is a conductor of electricity and how imagination would be the electricity, and perhaps it fuels our awareness like electricity fuels a lightbulb. I moved on to water and its conductive properties, to wondering if in the future we will discover that water is really a conductor of psi energy/chi (which would explain why my most profound thoughts always happen in the bathroom) and perhaps it is the key to why Earth exists as it does (Earth being held in our thoughts and made real to us) and why we seem so alone out here in the cosmos. We all know the water supply on Earth is dwindling, even if we don't want to admit it. Imagination seems to be suffering the same fate at the hands of TV and video. Barely anything is left to the imagination these days because kids are too lazy to think (or read), and parents are too lazy or self-absorbed to encourage them to do so.

What if, in the future, as the water supply dries up and humans stop developing their imaginations because we are told what to believe about everything and so many are lazy with their thinking, we discover water and imagination are the filters through which we're able to bring our thoughts to a tangible reality. (Remember our human bodies are made mostly of water!) Think how precious both water and a creative mind would be. Without them, our doorway (perhaps the star in Orion's belt) would close and our existence could melt back into the dimensions surrounding us; unable to be sustained separately as we see and experience it now. Perhaps this is what happened to Mars. Maybe it's not that life doesn't exist on Mars (or didn't an eon ago), it's just that their water supply dried up and their imaginations were suppressed to the point they were no longer able to hold the door open to separate their perspective from the Whole.

My continued thought springs from a conversation I had with John recently about physics. I can’t remember exactly the words he said, but the way he put things about dimensions and the relationship of elementary particles to each other gave me new pictures in my head that caused me to understand things better, even without the math. (Thank God!)

These new pictures and ideas in my head say different dimensions are not a matter of travel through either inner or outer space. (I doubt the space-time continuum exists anywhere else anyway.) Dimensions are more a matter of perspective because dimensions are caused by how the particles relate to each other.

As an analogy, think of who you are. Would everyone in your family label you the same way? No. You may be a daughter (or son) in relationship to your mother or father, but you may also be an aunt (uncle), and a sister (brother), and a granddaughter (grandson). You’re still you, and each relationship is still within the family, but you’re defined differently in each case.

You can extend that outside the family too – you are still you when you go to work, but now you are a co-worker or a friend or a boss. Of course that doesn’t mean you stop being a sister (brother) and an aunt (uncle) and a daughter (son). You’re still all those things too. Just because your relationship is defined differently doesn’t mean YOU are not you anymore. Right?

Ok, so apply that idea to elementary particles. Picture all elementary particles as being the same in every dimension. They have certain relationships here in our third dimensional world to each other. In this dimension they create nature, and objects, and people, and planets. And when you add time to the equation, you’re adding a fourth dimension and then you get into quantum physics, but those laws also apply to nature, objects, people, and planets.

Now imagine those same particles exist in several other dimensions as well but their relationships are defined differently, thereby creating aliens and other worlds and alternate realities and maybe even other versions of you. Same particles – different relationships. That was the idea John got across to me (although he did not use that analogy).

So, in order to experience other dimensions, is it possible that all we have to do is change how we see the relationships between particles? Rings true to me. Trouble is, we don’t know in what WAY to change our perspective.

I contest that emotions are a key. I think the change we are grasping for is more of an experience change – what we are feeling - not seeing or looking at physical things. Even so, here is a physical “seeing” example of changing perspective (in case the family analogy didn’t compute in your head). Check out this picture: 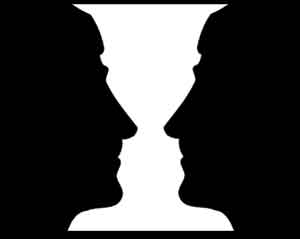 This is a classic example of perspective. Do you see a vase/candlestick or two faces looking at each other? What you see depends on your perspective. It’s a matter of how your mind interprets the relationship between the two colors.

Well perhaps it already does and you just don’t know it. Is it as easy as seeing two pictures in one, based on different colors? Maybe so. Think about all the media surrounding books like The Secret, which describe The Law of Attraction. Whether you believe in that or not, it’s the same principle.

Quantum physics has proven scientifically that reality is a field of probabilities. All things are possible all the time. (Omnipossibility – I love that word!) It is what you focus on that brings things into your reality. You are creating your reality by changing your perspective (focus) – the outcome of the experiment (your life) is directly affected by the observer (you) just like Schroedinger’s Cat and Heisenberg’s Uncertainty Principle. As soon as you measure the results, the probability wave collapses into your reality.

SO… the brain as a conductor between dimensions? I think so. In a sense. (Haha - all puns intended.) And water is the conductor that allows imagination (or chi, our "electricity") to power our awareness? Seems even more logical than the first time I thought it. Final thoughts... Choose your waves carefully and be kind to yourself when you measure the results so as not to collapse too hard into reality.

And I guess that’s where I’m going to end this because I’ve caught up to the edge of my thinking and I have to be somewhere shortly, so I’d better get my particles in gear.

Side note: If you haven't seen that movie K-PAX with Kevin Spacey (ever or in awhile), I highly recommend it. I watched it again last night and it was just as good this time as all the times previous. Really makes you think. :)

And yes, Mraz fans, of course I’m aware of how the title of this post corresponds with the date. I believe in higher energies and better things for all the people. I just hope MY luck doesn't run out today!

Posted by draagonfly at 1:35 AM 7 comments: Links to this post

Come Up to a Higher Vibration

Speaking of snakes and apples of knowledge... you should watch this video, even if you're pretty well-versed in the ideas it goes over in the first few minutes. It's about 20 minutes for both videos posted below (same video, two parts), but it's great information. And even if you've heard it all before, it never hurts to bring it back up to the front. :)

Don't worry, the subtitles are in Spanish, but the audio is English.

Also, one thing I picked up that I think is a mistake is that as he lists the chakras of Earth (around 5:48 in video 1), he mentions the heart chakra twice, skipping the third eye chakra by mistake. Oops. Saw a couple typos as well. But who's counting. :)

If you choose not to take the 20 minutes now to watch this, then you move on with your day and eventually forget to watch altogether as people often do, there is one thing I thought was truly powerful that everyone should take away. It comes up just around 6:45 in the second video. The speaker talks of a metaphor that goes like this:

This is the difference between the power of our Creator and anything else. Particularly evil. That you can go into a pitch black room full of evil, full of darkness, and light a little candle, and instantly that darkness flees. But you can't do the opposite. You can't go into a well-lit room full of truth and wisdom, and righteousness and joy, and health and harmony with the Universal power... you can't take any amount of darkness and go into that well-lit room and have any effect whatsoever. That is the metaphor which I frequently think of when I think that I'm not empowered. It is the greatest lesson for me, and I think for everybody else to know, that we are on the winning side.

As I listened to the speaker talk about this metaphor it brought to mind the bookmark I use to keep my place in the book in which I write the five things I'm thankful for each day (ok, most days). My bookmark says:

"All the darkness in the world cannot extinguish the light of a single candle."

The word "Faith" is stamped into the top (bookmark is metal). The words are attributed to Francis of Assisi.

Something to think about anyway.

Posted by draagonfly at 9:24 PM No comments: Links to this post