I'm about as non-Christian as they come so I'm always surprised when I find a song I really like that's done by a Christian group. Some music just transcends categories and labels. The Robbie Seay Band is definitely transcendant. Sure, they have their share of "come to Jesus" tunes that I avoid, but there are several others I really enjoy that leave the interpretation of faith up to the listener.

If there was ever a theme song for Barack Obama's victory speech last night, I'd have to say Love Wins from their new CD Give Yourself Away would be it. The lyrics are below so you can decide for yourself. I embedded the song above so you can listen.

Other awesome tunes by RSB are Better Days (from a prior CD), Rise, New Day, and Stay (from the new CD). You can purchase the individual tracks on iTunes or directly from the band on their MySpace page.

For those of you here in San Diego, they happen to be playing locally for FREE this Sunday. Check their web site tour page or their MySpace for details.

It’s a big world, we are hoping
For a big change, we are broken
In the fading light of a dying sun
We cry for redemption

Can’t stop, you can’t stop the seasons
Don’t stop, don’t stop believing
Keep on dreaming of the day when it all will change
Believe in the end, love wins
If you’re waiting for the time when your sun will shine
Oh, look above cause love wins

If it hurts you, just breathe in
When it pains you, just believe in
The radiant light of the morning sun
We can find our redemption

Email ThisBlogThis!Share to TwitterShare to FacebookShare to Pinterest
Labels: music

YES WE SURE AS HELL CAN

“There do exist enquiring minds, which long for the truth of the heart, seek it, strive to solve the problems set by life, try to penetrate to the essence of things and phenomena and to penetrate into themselves. If a man reasons and thinks soundly, no matter which path he follows in solving these problems, he must inevitably arrive back at himself, and begin with the solution of the problem of what he is himself and what his place is in the world around him.”

THANK YOU THANK YOU THANK YOU THANK YOU THANK YOU GOD and all those people that got off their asses and voted for something better than what we've been handed these past eight years. Did you hear the collective GLOBAL sigh of relief the first time the words "President Elect, Barack Obama" rolled off the jaded lips of the news media? I imagine winning the lottery would feel much the same as the elation that title elicited.

I will finally look forward to hearing articulate, educated, intelligent speeches from the White House again. (Christ, that alone might be reason enough for me to pay for TV service now!) I will no longer DREAD every news report on what's up in Washington DC. It feels so good to say I'm an American citizen again and not have my soul wince in pain.

I know he will do things I don't agree with, and I know there are those that think this was the wrong choice, but it's the energy and enthusiasm our drained country needs to regain its feet in our own hearts, as well as that of the world. I truly believe that.

In the words of Alfred Pennyworth, "Why do we fall, sir? So that we might better learn to pick ourselves up."

Email ThisBlogThis!Share to TwitterShare to FacebookShare to Pinterest
Labels: politics 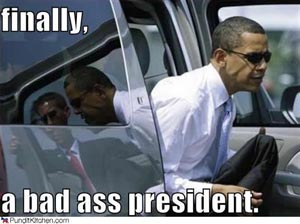 It’s no secret that I will vote for Obama. Not because I’m some kind of tried and true Democrat - in fact, back in college, I was registered with the Young Republicans thanks to one of my friends who was actually in school to learn something. Somewhere between invading the Sigma Nu house and my roommate’s “How to make a beer can bong” lessons, my good friend slapped me upside the head and said "Hey! Pay attention! This shit is important to more than my Poly Sci degree!" Don’t worry, we finally returned the favor by corrupting her with alcohol, but it wasn’t easy.

I was a registered Repub right up until BushCo started wiping its crack with our planet. After a couple years of peering through increasingly polluted waters, I decided swimming to the other side was the only splash I could make to show my disapproval of where the Republican party was headed, so even tho I don’t agree with ALL of the Democratic platform, that’s what I choose for now.

If the truth be known, I think wisdom for our country lies somewhere in the harmony of the two parties – but since our nation dearly loves to “create sides” and uphold them, voting down the middle often renders your voice mute. Seeing both sides from a center position, however, gives great perspective in my opinion. Obama has some experience at being in the middle of opposing views (examples: Muslim vs. Christianity, black vs. white) so I think he will do more good than harm not only for our nation, but for the Globe.

Did you know George Washington is the only elected President we’ve had that was not affiliated with a political party? In fact, most of our founding fathers were opposed to political parties and never intended for them to be part of our government. But I digress.

Recently, a copy of John F. Kennedy’s book Profiles in Courage came into my hands. I thought it might be worth something on eBay since it’s older than me, but turns out it’s not. Instead of selling it, I started reading it. I am amazed at how relevant the words still are, especially in these last couple months leading up to Our Big Election. Check this out:

This is a book about that most admirable of human virtues – courage. “Grace under pressure,” Ernest Hemingway defined it. …

A nation which has forgotten the quality of courage which in the past has been brought to public life is not as likely to insist upon or reward that quality in its chosen leaders today – and in fact we have forgotten. We may remember how John Quincy Adams became President through the political schemes of Henry Clay, but we have forgotten how, as a young man, he gave up a promising Senatorial career to stand by the nation. We may remember Daniel Webster for his subservience to the National Bank throughout much of his career, but we have forgotten his sacrifice for the national good at the close of that career. We do not remember, and possibly we do not care.

“People don’t give a damn,” a syndicated columnist told millions of readers not so many years ago, “what the average Senator or Congressman says. The reason they don’t care is that they know what you hear in Congress is 99% tripe, ignorance and demagoguery and not to be relied upon…”

Earlier a member of the Cabinet had recorded in his diary:

While I am reluctant to believe in the total depravity of the Senate, I place but little dependence on the honesty and truthfulness of a large portion of the Senators. A majority of them are small lights, mentally weak, and wholly unfit to be Senators. Some are vulgar demagogues… some are men of wealth who have purchased their position… [some are] men of narrow intellect, limited comprehension, and low partisan prejudice…”

And still earlier a member of the Senate itself told his colleagues that “the confidence of the people is departing from us, owing to our unreasonable delays.”

The Senate knows that many Americans today share these sentiments. Senators, we hear, must be politicians – and politicians must be concerned only with winning votes, not with statesmanship or courage. Mothers may still want their favorite sons to grow up to be President, but, according to a famous Gallup poll of some years ago, they do not want them to become politicians in the process.

Does this current rash of criticism and disrespect mean the quality of the Senate has declined? Certainly not. For all the three statements quoted above, the first was made in the twentieth century, the second in the nineteenth century, and the third in the eighteenth (when the first Senate, barely underway, was debating where the Capitol should be located).

The first copyright listed in the front of the book is 1955. Are these paragraphs still completely relevant to today’s political arena, in yet another century? You bet they are. On the next page, JFK asks, “Does it mean then, that the Senate can no longer boast of men of courage?”

My answer up until last year may have been different, but now I’d say we are down, but don’t count us out just yet.

I don’t think Barack is the next JFK (and if he’s elected, I REALLY hope he’s not!). However, my intuition says he has some admirable core character qualities that shine through the bullshit of politics. He is probably going to make policies I don’t agree with during his term, and perhaps there will even be a point when I think "I can't believe I voted for this." However, OVERALL I believe he is a man of courage; grace under pressure; FINALLY A BAD ASS PRESIDENT. And I pray we are NOT a nation that has forgotten the quality of courage because God knows we need it now more than ever.

Make sure you get yourself to the polls today and vote. People died so you could have that right. Don't waste it. And never assume it's already wrapped up just because Obama is ahead in the polls. As Yogi Berra said, "It ain't over til it's over!"