I Remember It To A Tee

I posted this as a response to a recent blog by Jason Mraz, but since it's such a good memory I'm posting it here as well. My apologies for the repeat to those of you who may have already read it in the comments of Freshness Factor Five Thousand.

My mom took me with her on a business trip to San Francisco when I was in 6th grade. It made quite an impression on me because it was the first time I was allowed to stay by myself (not even at home!) while she went to the office all day.

The Hyatt Regency in Embarcadero Center (i.e., the hotel we stayed at) is where I developed my love of jazz because there was a piano bar at the bottom of the atrium. I wasn't supposed to leave our room so when things got too boring, I would prop the door open in case Mom called on the phone, and I would stand just outside at the edge of the balcony that overlooked the atrium and listen to the notes float past me on their way to the top. I made up all kinds of scenarios in my head about being a princess in a tower, or a grand lady from 100 years ago on holiday as I listened to the music. My imagination was (is) limitless. Nowadays someone would've probably called the cops on mom for leaving me alone in a hotel at that age. Oh well, we do what we have to as single parents.

Anyway, Mom took me to a magic show one night at this little hole in the wall place. It was kind of late for a 6th grader and there were no other kids in the audience. The people on stage called themselves Asparagus Valley Cultural Society. Most of the comedy material went right over my head and by the end I think my mom was a little sheepish that she didn't know the show was NOT really for kids. I mean who woulda thought? Aren't all magic shows for kids? Even if they don't end until 11pm?

As an aside, the apple doesn't fall far from the tree. When Katy was around 7 or 8, we were on a trip to Philadelphia. I took her to the movies to see Beavis & Butthead Do America. I knew it might have SOME jokes that went over her head, but I had NO IDEA what Beavis & Butthead were really all about. I mean, c'mon... it was ANIMATED! Aren't all cartoons for kids? And when they say "DO America" aren't they talking about a road trip?! haha But back to our story...

The Mystery of the Peking Snow Duck (which was actually a rabbit, as made obvious by the punchline "that's Snow Duck!" as the "peeking" rabbit is pulled from under a cloth) was the best trick since it was probably the only one I really got (comedy-wise - magic can be understood at any age :).

The magicians said they would be in the lobby after the show and I begged Mom to let us stay and meet them because I can never get enough magic. (Maybe that's where my groupie nature started!)

The big guy from on stage came out carrying a cage. He let me pet the rabbit and asked if I would like to stick pencils in its ears. (Weird, the things we remember.) I giggled and said no. He thanked us for coming to the show and gave me a green tshirt with their name and logo on the front. It was too big to wear, but I slept in it for years, and I still have it (and it fits now).

The best part of the story? Those magicians were Penn & Teller. :) 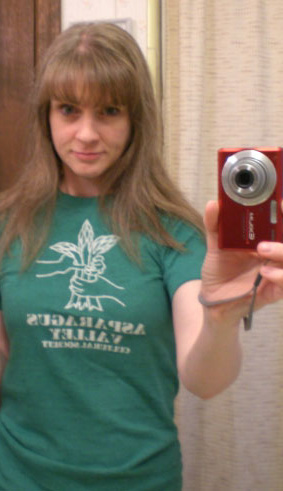 Picture was taken in 2008. Click HERE for an account of how Penn & Teller started out (and yes, Wier was still part of the act when I saw them in San Fran). I think it's SO ironic that they spent years performing in Philadelphia (where I grew up) but *I* saw them all the way across the country. Not the first time that's happened. I lived in Arizona for six years before moving to New Jersey. After I moved to New Jersey I started working for a company that was headquartered in Scottsdale, in the same building that I worked in while I lived in Arizona. Nothing like moving across the country to work for the people upstairs!

Posted by draagonfly at 9:19 AM

Awesome! Must have missed this on FFFT but I rarely read the comments after posting my own (there get to be so many I just don't have time for that lol). I love that you have the shirt still, it amazes me. My closet gets purged at least twice a year haha. Must have been cool to see Penn & Teler before they were such a big act. Which one is it that doesn't speak? Did he talk back then?

Teller is the one that doesn't talk, and he didn't talk back then either in the act. Never did find out why Wier didn't stick with it.

I'm not a pack rat for clothes by any means, but there are a few things that I've kept over the years just for whatever reason. I'm really glad that shirt was one of those things. I have a lot of awesome memories from that trip.

I should've added in the blog that I visited San Fran again for the first time since 6th grade about a year ago - again with my mom. We went back to that hotel and it's barely changed. It was such a trip to walk in there as an adult and remember all the things about the trip as a kid. I could've walked the lobby by memory too - strange how our brains can retain something like that for so long in such perfect detail, but I couldn't tell you what I did last week!

the world, despite its dangers, is still a place of beautiful discovery. my heart does a little secret dance when i hear a story like yours.